When East Ridge resident commercial real estate businessman Gary Sisler attended a Rotary meeting and learned about the Footprints Foundation, he decided to talk with Chairman of the Lifestyle Committee Jnita Wright to see if Villagers were interested in helping put together birthing kits for women in the Congo. Joining with Villager Janet Launcelott, Gary and Jnita arranged for Footprints Foundation Executive Director Lorna Owens to meet with the 40 volunteers who signed up for the early morning East Ridge Retirement Village workshop on Thursday, August 29. 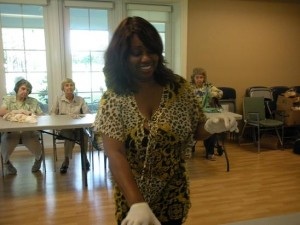 An outstanding speaker, lawyer, author, former registered nurse and midwife, Lorna gave the Villagers an oversight of conditions in the Congo pointing out that giving birth is especially risky and most women deliver without skilled assistance. Reporting that 6 million people have died in Congo conflicts since 1998, and that “half of these deaths are children under the age of five,” Lorna related that she founded the Footprints Foundation to improve infant and mother mortality in 2011. 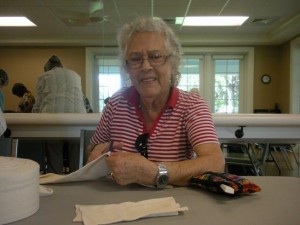 The organization travels twice a year to the Congo. Not only does Lorna go, but she takes two medical doctors and two nurses with her along with the birthing kits. While there, the team trains midwives and traditional birth attendants in both maternal and new-born care. In addition, with rape used as a weapon of war, Lorna explained that the Foundation also provides surgery for rape victims. 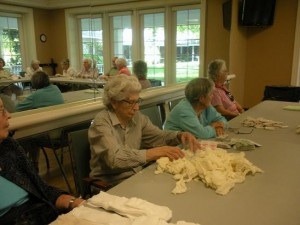 The group of 40 volunteers sterilized their hands, slipped on latex gloves and began a very efficient assembly line – – cutting umbilical cord ties…passing to the next Villager…measuring and cutting baby warming hats from large rolls…passing them on…folding two pairs of latex gloves…placing a razor blade on top….followed by gauze squares…a green sheet of plastic…sterilized cloth…packaged small soaps…packets of alcohol…then all stacked items went to Villagers who slipped each pile of items into plastic Ziplocs.

The process was executed cheerfully in perfect harmony, and the volunteers filled more than 200 Ziploc baggies which will provide lifesaving items to women in the remotest Congo areas where healthcare is almost nonexistent. A good cause… performed by Villagers who are always among the first to volunteer – – to reach out and give back, not only in the community but the world at large. Lorna Owens is a true inspiration to the women of the world. As a nurse, midwife, life coach, motivational speaker, author, talk show host, and an attorney, she has touched the lives of many by reaching out to those in need.

Originally from Jamaica, Lorna knew that she wanted to be a lawyer since the age of 12. Her mother, however, told her that lawyers do not go to heaven, so she decided to become a nurse. Nevertheless, Lorna still carved her way through university obtaining several degrees, including one in law.

Her most current project is the Footprints Foundation, which was founded in 2011. Its mission is to improve the life expectancy of mothers and infants in the DR Congo. The question here is, “Why the DR Congo?”

After having watched a CNN report on the DR Congo and learning about the numerous violent rapes that occur in this African country, Lorna was determined to find a way to help. She actually traveled to the DR Congo this September 2011, and said it was “Life changing.” She discovered that so many women die right after giving birth, and a majority of the newborns do not even survive. In fact, the Footprints Foundation program will provide proper training for the midwives and traditional birth attendants of Congo. She plans to travel this July to the DR Congo with a group of nurses to begin the 3-week long training sessions. Her goal is to have these training sessions take place at least three times a year. This is Owens’ way of giving back to the African community, and what better way to help others than with something you do best.

As a woman who plays so many roles, time must always be an issue, but Owens says that it can all be done. “I just live in the moment, ” Owens explained while smiling.